ATHENS IS LIVELY, BUSTLING AND UTTERLY RIVETING, I LOVED THE ATMOSPHERE, THE DIFFERENT AREAS EACH WITH THEIR OWN VIBE, AND THE SHEER CREATIVITY OF THE LOCALS. I’M PLANNING A RETURN TRIP ALREADY.

I’d heard mixed reports of Athens. Some people said it was just a bit grubby and nothing to write home about but I just loved it – I like my cities a bit lived in! I did lots of research because any big city is daunting for a short break; you don’t want to miss out on anything, you have to ensure the spots you want to see aren’t miles apart and unrealistic. Where to start?

To be fair, I needn’t have worried. Just wandering around the city would have been a ball and you definitely can’t do it all in one go so, relax and bite off a doable amount and save the rest for next time! In the end I devised a handful of loose day itineraries to guide us through the most important sites in a doable days walking and it worked beautifully.

The city is walking friendly with lots of pedestrian areas, including the Archaeological Promenade, the long tree lined walk way which links the major sites. On foot you can explore almost by accident the different districts with their different vibes – chic around Syntagma, more grungy in Monastiriaki, and the hip and edgy Plaka.

The best advice is to get a centrally located hotel so you are immediately in the thick of things and can just wander abroad from this base to find all the good stuff. We stayed at the fabulous Inn Athens. Small and friendly (only 20 rooms) with a really relaxed feel, we were moments from Syntagma Square and 15 minutes from the Acropolis. Just off the main road but in a quiet square, its a private oasis from the bustle and heat of the city. There’s a great wine bar and bistro – By The Glass – in the atrium and the breakfast was amazing!

So, we pitched up, checked in, had a glass of vino and poured over the map to get our bearings. It was a little late in the day to get a decent amount of time at the Acropolis but we did wander that way through the pedestrian streets of the Plaka district with its boutiques and tavernas, and up to the Sacred Rock. We bought the €30 ticket which meant we could visit all the main attractions over the next few days more cheaply than individual entrance fees and we avoided the big queue at the ticket office the following day. Top tip. 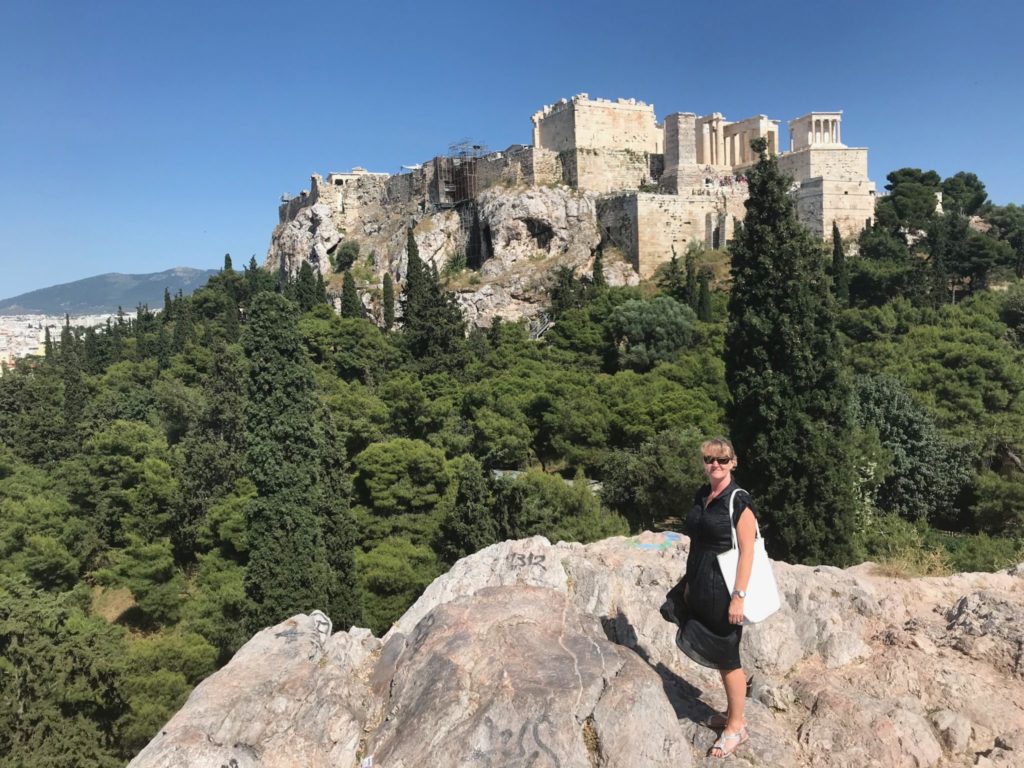 A couple of old ruins, Athens

The next day, following a hearty breakfast, we headed out to do battle with the crowds at the Acropolis. This was May so shoulder season and it was pretty heaving. Take water, a hat, sun cream and a backpack full of patience as you will shuffle along at times. Whatever, the site is breathtaking. The crowds can’t diminish the awe at being somewhere so ancient, which has survived so many ravages. There is actually a complex of sites, including the Parthenon, the Theatre of Dionysus from the 4th Century B.C. and the temple of Athena Nike and the overall effect is quite stunning and views breathtaking. 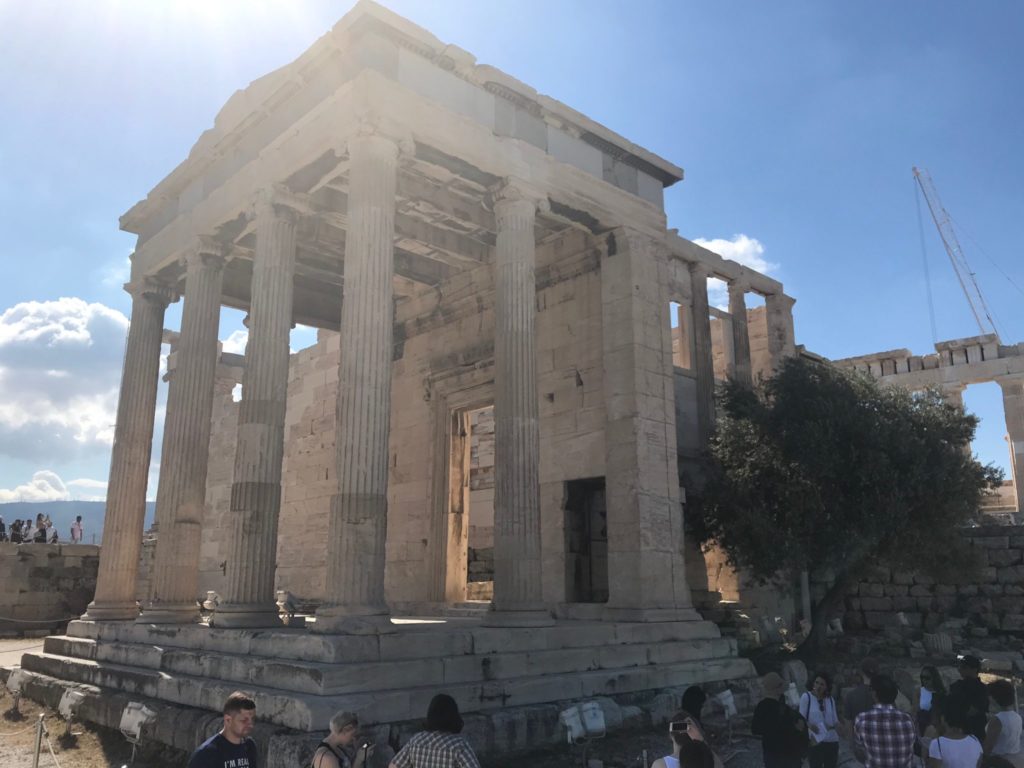 After a good few hours taking it all in, we visited the Acropolis Museum, built to mirror the Parthenon for size and aspect, which is absolutely amazing. Firstly, it’s a beautiful, impressive building with a glass walkway over an ancient city which is being excavated beneath your feet. Secondly, it houses some amazing finds and really helps to explain the history, myths and timelines. It’s very beautifully curated over several floors, culminating in the frieze from where the Elgin Marbles were removed. It’s incredible to see this with the actual Parthenon up on the hill through the window. Well worth a visit. 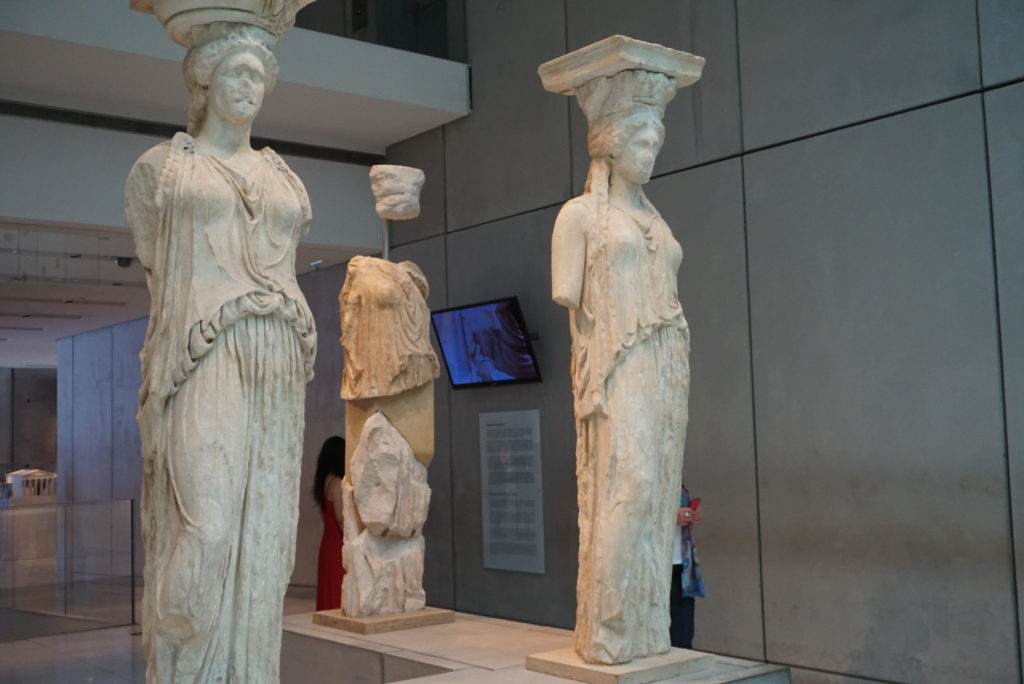 From the Acropolis you can see columns and temples all over Athens.  We headed to one of the most impressive looking, Ancient Agora, the heart of political and social activity and a large complex of remains of an ancient city – the court of law, gymnasium, temples and stoas. The Temple of Hephaestus, from 415BC is still remarkably intact and the stoa of Attalos contains lots of interesting finds. Again, give yourself plenty of time to wander and take in the feel of walking in the footsteps of ancient civilisations who strolled through the Cyprus trees, just as you are doing but without the selfie sticks. 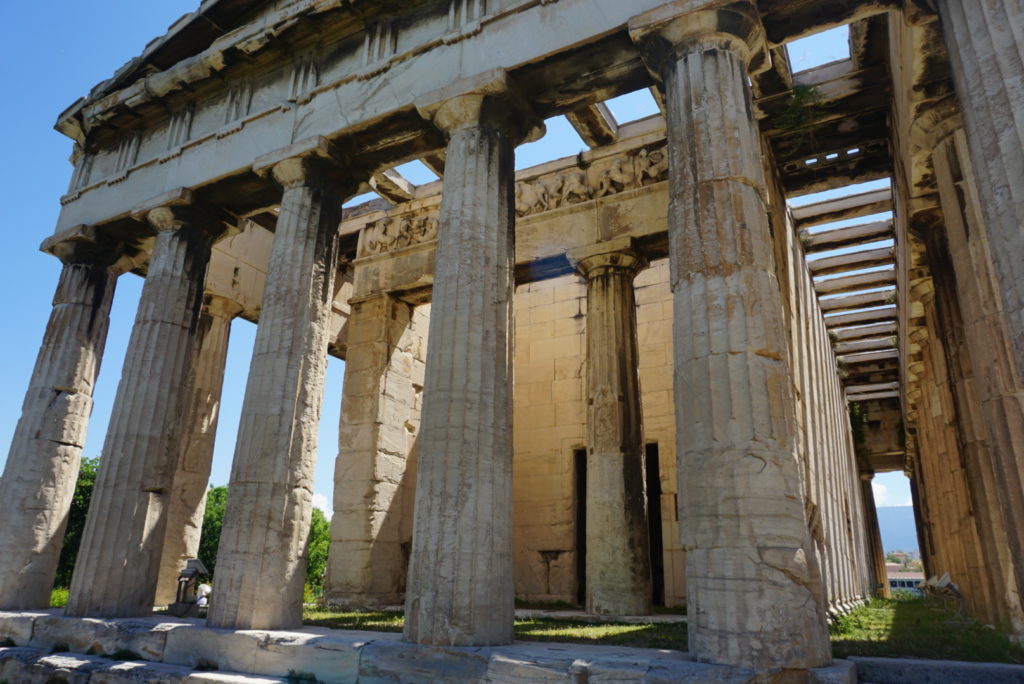 The well preserved Temple of Hephaestus at Ancient Agora

The best thing is when you are done with the ruins you pop out the exit on to Adrianou Street in Monastiraki, which is lined with bars and tavernas so you can grab an Aperol and a bit of shade before heading off to the next one. The next one being the Roman Agora to the East of the Ancient Agora which contains the Gate of Athena Archegetis and the Tower of the Winds.

When you are feeling as dusty as the original sandle wearers, head back through Plaka’s Monastiraki Square, towards Syntagma and you begin to get a feel for the City; the bustle and vibe whilst falling over ancient churches and ruins. At night these streets become beautiful and cosy as the lights come on under the vines, the outside tables fill with diners and live bouzouki music starts up.

Now, if you are a loyal reader, you will know I love a rooftop bar – for the views of the city which help you get your bearings, of course. Ok, and for the Gin Fizz. Athens has a slew of great options depending on your taste. There’s the GB Rooftop Bar at the top of The Grande Bretagne Hotel looking over Syntagma Square and with stunning views of the Acropolis all lit up. You can see the Parliament building with changing of the guard every hour and even Panathenaic Stadium in the tress in the distance. They do a great cocktail to set you up for a night out. But it is pretty formal, as you’d imagine. There’s also A for Athens which is entirely more edgy and noisy in the heart of Monastiraki Square but gets very busy, especially at sunset. 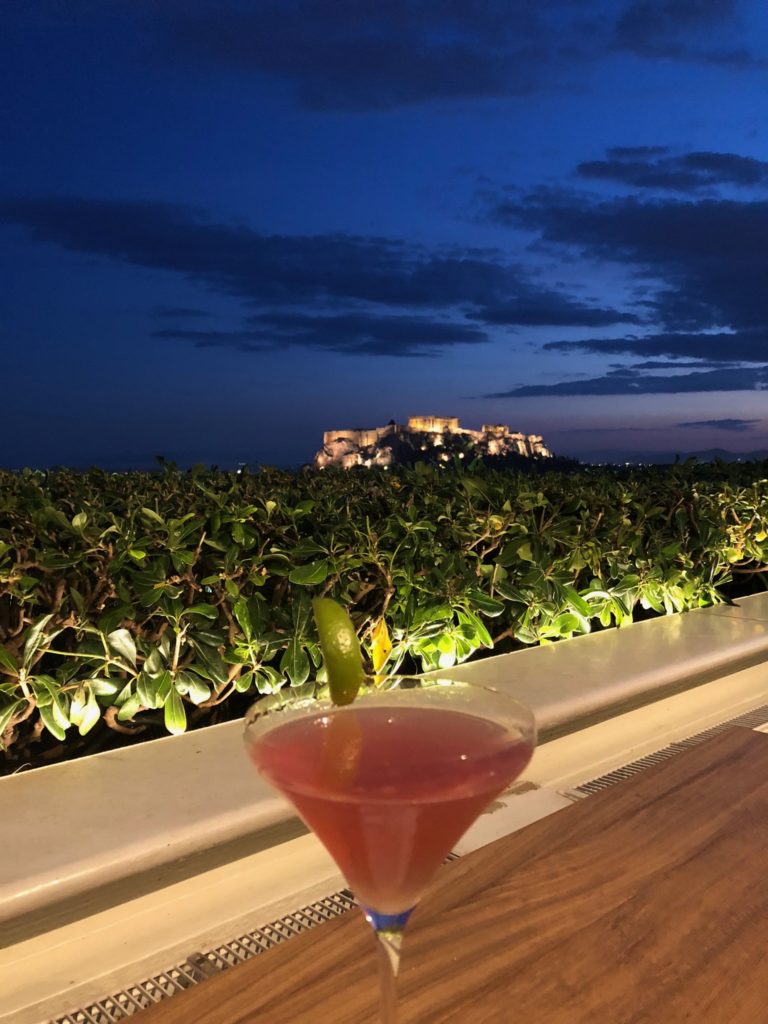 What a splendid sight, and that’s the Acropolis in the background

By day, we loved the National Gardens for a walk through the flowers and to get off the busy road, en route to the Panathenaic Stadium (also included in your €30 ticket price) which is built on the site of the ancient stadium which hosted the first form of what we now know as the Olympic Games. It’s a giant horseshoe shaped track lined with marble seating for 68,000 people, and adorned with statues. The first modern Olympic Games were held here in 1896 and it was used again in the 2004 Athens game. 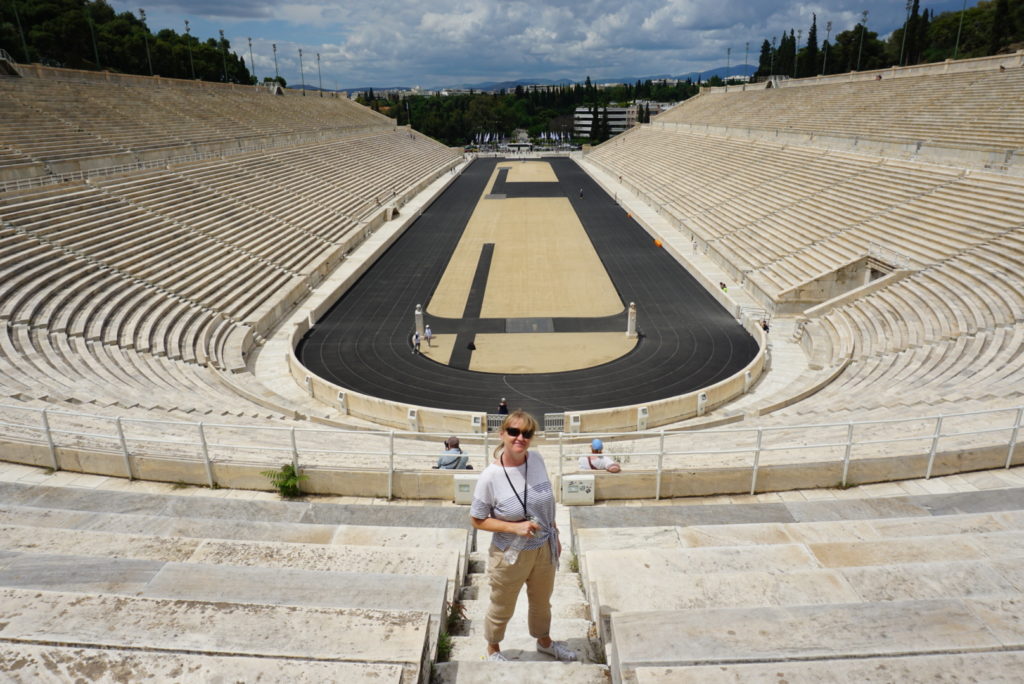 The site of ancient games, the Panatheniac Stadium. I put in a couple of good lap times

We ate very well here in Athens but our best find was Scala Vinoteca, at Sina 50 & Anagnostoloulou, a 10 minute walk from Syntagma Square. The interior is beautiful with wine bottles lining the walls floor to ceiling. The staff were welcoming and the food was really exciting – innovative and beautifully presented, with some unexpected twists in terms of flavour combinations and great desserts. I love Greek food but this was really a cut above. The sommelier was very knowledgable and helped us pick some great Greek wines. We were treated to some lovely dessert wines for fun, too! TC and I still remember it fondly as a real experience. 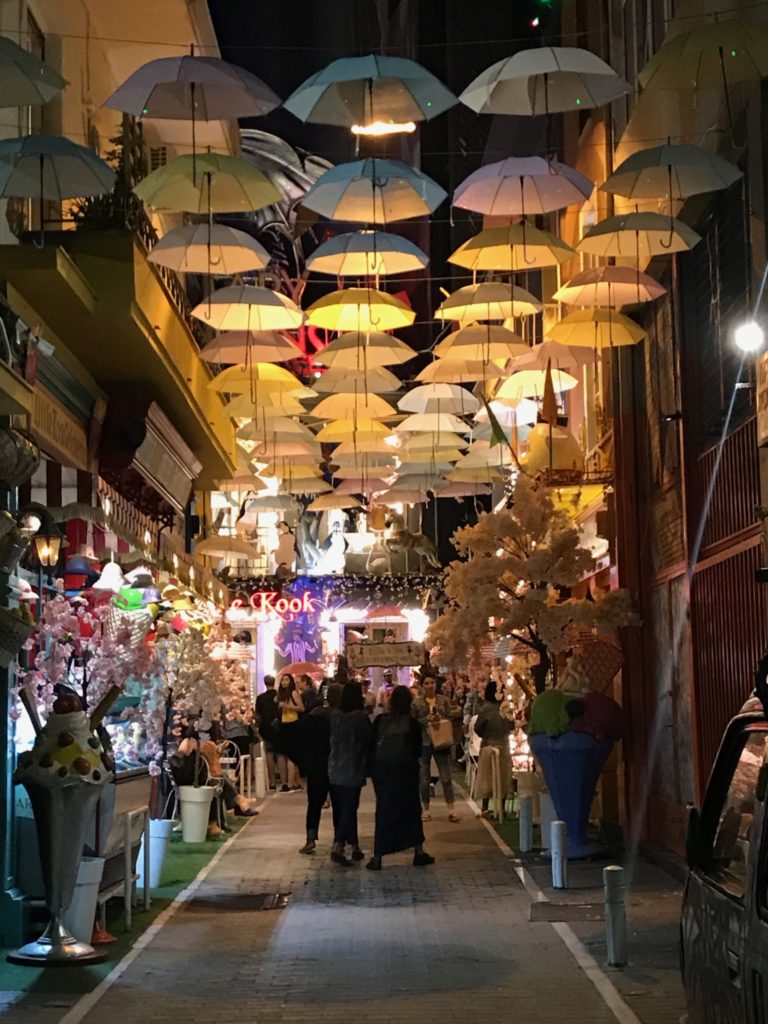 You never know what you’ll find on the streets

We also enjoyed Oineas for more traditional fare, huge portions sitting outside their fun restaurant, very friendly. We tried Tzitzikas Kai Mermigas, again traditional Greek dishes, very tasty. People were queuing round the block to get in so definalty book. Very buzzy place with tables out on the street and a great noisy atmosphere.

TC loves a market in any country we go to – the sites and smells of giant fish and heads of things! Hidden away in the main market is the no frills,unpretentious Epirus Tavern serving a set menu of authentic Greek dishes for you to pick from – if you can stand the smell of fish wafting in. Very friendly with great food and great value. TC is a convert to goat. This is travelling like a local indeed. 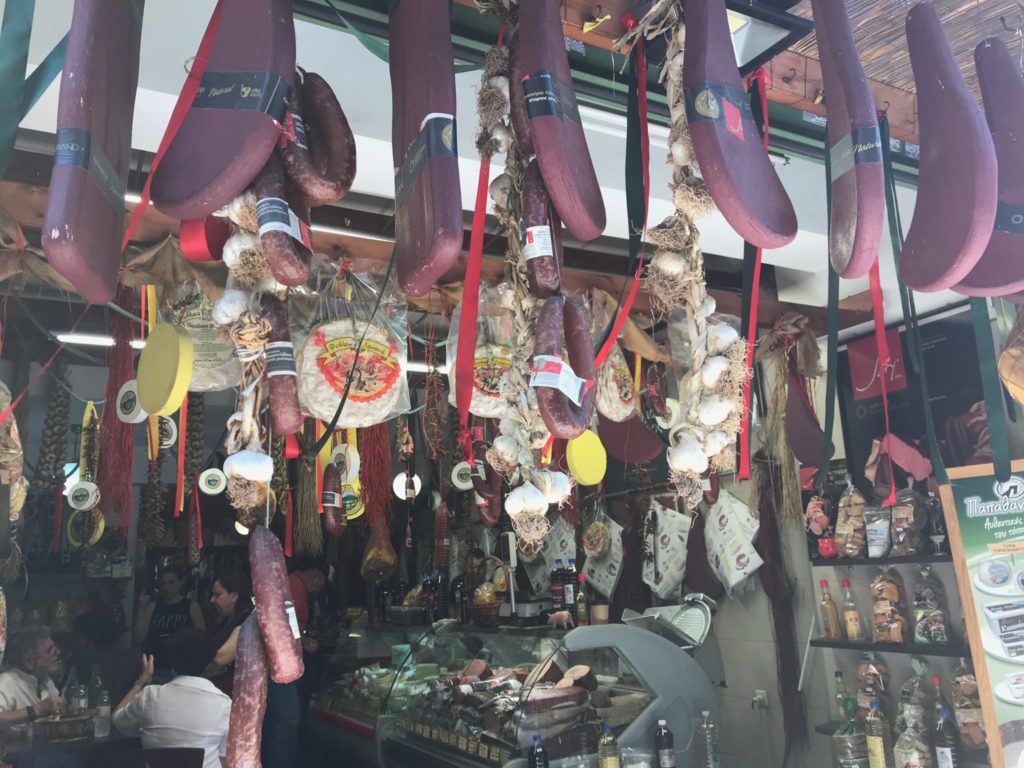 The delights of Athens Central Market

You certainly won’t go hungry in Greece, feeding people is about hospitality and they are very hospitable! You can also rock up at most restaurants late into the night and they will still roll out the red carpet. It’s easy to get chatting to the staff and maybe even enjoy a digestive on the house to seal your new friendship.

Greece has had a tough time of it economically for many years so it’s great to see it fighting back and working hard to make tourists welcome, it’s no longer just the home of the Acropolis but has so much more to offer in a walkable sized area. There’s a great cultural side with art and music and it’s becoming very foodie with a diverse mix of restaurants and bars springing up. All in all, it’s a great city break location and I will definitely be going back.

I hope this has inspired you to think about Athens for a short break or as the perfect end to a beach holiday, as we did. If you’ve already enjoyed Athens, let me know your recommendations and favourite places.

Are you a fan of a rooftop bar? Tell the group your favourites. I’d love to hear from you, just use the comments box below to get in touch.